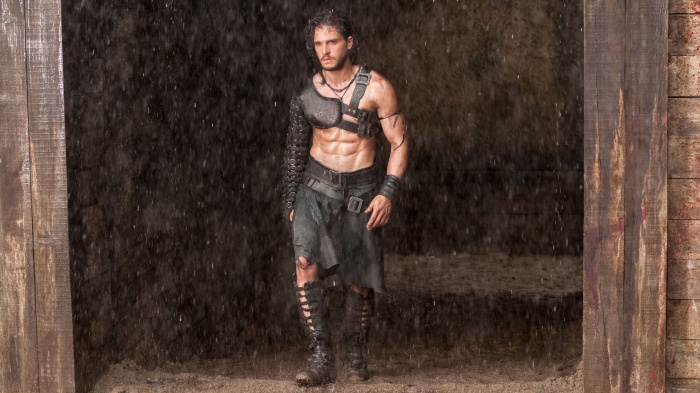 This first teaser trailer for Paul W.S. Anderson‘s ‘Pompeii‘ promises two things: a ripped and ready Kit Harington (aka Jon Snow from ‘Game of Thrones‘), and plenty of CGI-enhanced action.

There’s not much here but stylised images, but for those who love their Jon Snow, Harington is obviously getting the chance to lead a film, and this could be his launching point into a film career. It could also be his ‘Jade’ (or ‘High Road to China’ or ‘Lost in Space’ or…) There are some great shots here, but then others that look like they need another round or two in the computer before the film is ready for theatres.

‘Pompeii’ will hit theatres in February 2014.

It’s late summer in 79 A.D. and the city of Pompeii glitters at the foot of the mighty Mt. Vesuvius. MILO, the slave of a shipping tycoon, dreams of the day he will buy his freedom and marry his master’s daughter, COLUMBA. What he doesn’t know is that Columba’s debt-ridden father has promised Columba to a despicable Roman Senator to pay off an overdue loan.

Milo does know that his friend, the Gladiator NIGELLUS, is being forced to compete the next day in a seemingly unwinnable battle in the Coliseum. As Milo tries to find a way to save his friend, he learns that Columba has been promised to another man and that he himself has been sold to a new master. Just as it seems things can’t get any worse, Mt. Vesuvius suddenly explodes with the power of 40 nuclear bombs, sending a torrent of 1,000-degree ash and smoke into the city. Lava flows down the mountainside, killing thousands. As Pompeii crumbles, Nigellus is imprisoned inside the Coliseum, Columba is locked inside her family’s villa, and Milo is trapped aboard a ship bound for Naples.

As the people of Pompeii flee the obliterated city, Milo is determined to return to it to save his friend and his beloved Columba. With fire and ash destroying the only world he’s ever known, an ordinary man is tested to his breaking point in this heart-pounding tale of extraordinary heroism.