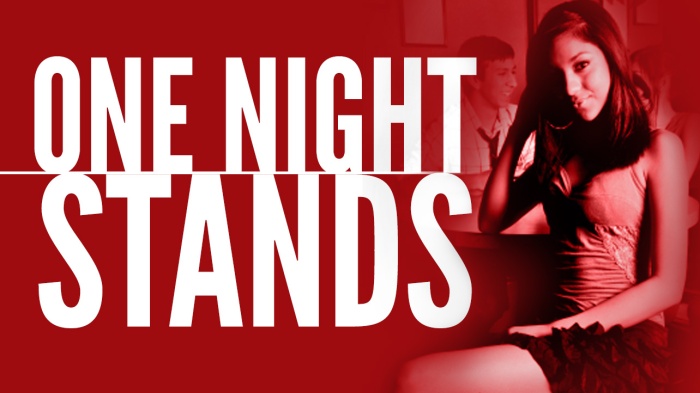 On One Night Stands

Promiscuity has never really been my thing. I like sex just as much as the next person, but I don’t find myself out every weekend trying to bag randoms. I try to only offer my snatch up on a silver plated platter to the finest of specimens, but occasionally, every so often, I forget and before I know it, the almighty vag takes over.

It could be post breakup, post weight loss, post I just bought a crap load of shoes and need to validate my spending habits, whatever it may be, there comes a time every once and awhile that I just need to go out and slay some hunky guy with a beard and call it a day. Like I said…promiscuity has never really been my thing…

It’s in these rare moments that I want nothing more than to throw down and peace out. I’m not trying to kick it, get to know how you like your coffee or really even know your first name. On these nights, my brain goes a little something like this.

–I need an outfit that says, “I’ve got a pretty sweet brain in there, but tonight it doesn’t compare to the brain I give.”

–Which pair of underwear do I like, but not enough that I care if it gets ripped, lost or taken?

–What level of eyeliner says, “Don’t tell me about your childhood, just get on it?”

–Ew, who is this guy with the tongue ring. Stop talking to me. I don’t care what car you drive.

–Where’s that guy with the tongue ring? Oh there he is.

–Stick your boobs out and wink at him. Nice it worked.

–He’s almost out of his beer. I’m gonna buy him another one so he knows I want to bang.

–Yeah, he just grabbed my butt. I’m totally into this right now.

–I’m going to ask him if he wants to leave.

Doing it and Doing it right:

–Oh yeah, you’re taking off my pants. Awesome. So glad I did those extra lunges yesterday. Maybe he’ll think I work out on the reg?

–Woah, slow down cowboy. No one likes a jackhammer.

–Ew, what is that on his nightstand?

–Why does he keep doing that Miley Cyrus thing with his tongue?

–Maybe I should return those shoes, they were kind of last season’s reject. Kind of like this guy.

–Oh God, what is that face he’s making now?

–I wonder if he would notice if I just laid here and did nothing? My legs are sore from my lunges.

–Mmm, I kind of want Taco Bell after this. Wonder if we’ll be done in time for a late night snack?

–Guess I should just fake it, so I can leave sooner.

–Look’s like he bought it. Awesome. Now get off of me.

–If I leave now, I can still make it to Taco Bell, hit up some Adam&Eve self fun time, and fall asleep to Boy Meets World reruns.

–No, I don’t want to give you my number. I’m making up the excuse about having a Saturday work meeting. I have to go, stop touching me. Where’s my GD underwear? Screw it, every man for himself.

–I’m not doing this again. This happens every time.

–I think I need another pair of shoes…