Hot on the heels of her controversial VMAs performance, Miley Cyrus has released the music video for her latest single, ‘Wrecking Ball’.

Forever courting controversy, the 20-year-old star gets her gear off and rides a wrecking ball completely naked in the new clip, directed by Terry Richardson. Richardson and Cyrus previously worked together on a salacious photo shoot that saw the former Disney star well and truly shake off her squeaky clean image. 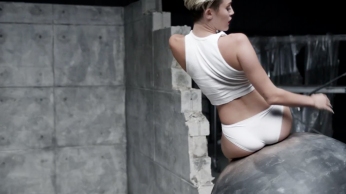