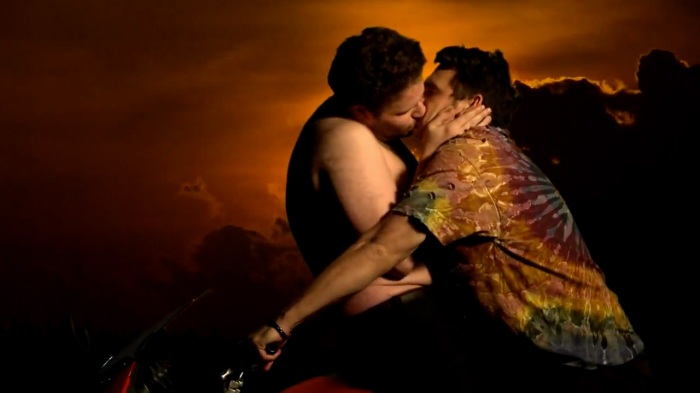 The world collectively chuckled when Kanye West revealed his ludicrous “Bound 2″ music video, which co-starred his fiancee Kim Kardashian, who rode topless on a motorcycle.

Get ready to laugh even harder as Seth Rogen and James Franco made a shot-for-shot remake of the “Bound 2″ music video on the set of their new movie, The 2 really are redefining the expression know as “Bromance”.

Seth Rogen posted the video to his Facebook page with the message, “James Franco and I made a video for you guys during down time on the set of #‎TheInterview Check it and let me know what you guys think.” The title card of the video says, “While on the set of their new movie ‘The Interview,’ James Franco and Seth Rogen felt inspired to recreate their favourite new video. Shot. For. Shot.” James Franco nuzzling himself into Seth Rogen’s naked bosom is something you will never forget. Enjoy!